July 16, 2011. We all make choices. This time, I made the right choice. I was planning to sign up for all three Capt'n Karl's 60k races... and at the last minute, I decided to back off to 30k. I am so happy I made the right choice, because the 30k race at Ink's Lake was by far the most difficult race I have ever completed, and I probably would not have completed 60k there. I am sure the idea of a night time trail race appeals to me because of the unknown factors in night racing. 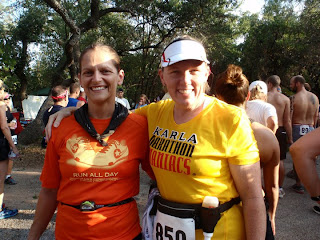 My friend Karla and I left my house at 2pm for the 3 and 1/2 hour drive to the park, which is located in Texas Hill Country, northwest of Austin. We had a nice drive, the weather was hot but beautiful and of course, even though we are in a desperate situation with regards to lack of rain, I was happy that it did not rain on race day. The park was packed when we got there. We picked up our race packets and started looking for a place to park. No luck there so we went back to the park headquarters and paid for a campsite, even though we were not planning to stay all night. There was someone parked in our site, and when we told them the site was ours, they proceeded to just drive off and their bike was leaned against the front of their truck. Lucky for them, we saw what was happening and stopped them.

﻿
﻿﻿﻿﻿
﻿﻿﻿ The 60k runners started at 7pm on the same 10k loop as those of us running the 30k would be starting out on at 7:15 pm. I had a pretty good run/walk going on the first loop, finishing it in 1:35. That was a lot faster than I was planning on. I still felt good, but the course was really TOUGH. Lots of quick steep rocky climbs, low hanging tree limbs, and more quick rocky descents.


﻿ ﻿
These race photos  taken by EnduroPhoto will give you an idea of how tough but beautiful the race course was. (Yes, I was hamming it up for the camera... how about those calf muscles!) I went to this race with a brand new nutrition plan, which is not a good idea. I figured out partway into the second loop that I had forgotten something. I have been using Hammer Perpetuem but wanted to find another source of protein for endurance events because I am trying my best to follow a Paleo-like nutrition plan for the rest of my life and the soy protein in Perpetuem is a big no-no. Perpetuem contains a good amount of sodium, and I forgot to add a little sea salt to my protein/carb liquid fuel. I started out taking the same amount of Endurolytes as I would if I was using Perpetuem and started to have some leg cramps half way into the second 10k. It took me a little while to realize what was going on, and usually if you get behind on electrolytes on a hot day, it is very difficult to catch up. I did my best and started to take extra Endurolytes between aid stations which were about 5k apart. Also, a young female runner approached to pass me and stopped, asking me for a shot of my water. I was carrying only one hand held bottle, and she was not carrying water at all. I did give her a shot of mine, but that caused me to go the last 2 miles or so of the second loop with no water. The second loop took me 1:45 to complete. , and I hung at the aid station for about 10 minutes to regroup and eat some watermelon and orange slices.
When I headed out for the 3rd 10k loop, I knew I was going to have a hard time. It seemed that everyone else was commenting on how humid it was, but I live closer to the coast, so I was crusted with dry, salty residue as if there was no humidity... Had I been racing closer to home, I would have been soaked through with sweat. Anyway, I just kept packing in the Endurolytes, and remembered to drink water at the aid station, rather than just fill my bottle and continue on. I took a break when I reached the 5k aid station of the last loop… drank plenty of their water and took some of their Endurolytes to make sure I would have enough of my own to finish the loop. I also finished my liquid nutrition and filled that bottle with water too, so I now had a little more water for the last section of the course than I had for the previous 2 loops. I am sure I was a ridiculous sight, passing people on flat or downhill sections, then as soon as I would reach a spot where I had to climb, one or the other of my inner thighs would cramp up severely. I had to stop and stretch… every time I stretched one side, the other would cramp up. Every runner who passed me asked if I was ok and offered me water. I always replied that I just had a cramp and I would get these bitches (my legs) moving in a minute. The last loop took me 2:26 to complete because of all the time I spent trying to work the cramps out of my legs. Anyway, I finished the 30k in 5:46:31 and am very happy to report; I was not in last place. LOL

In case any of the volunteers read my blog… I was the one who kept thanking GOD that I didn’t sign up for the 60k! I would certainly have been a casualty (DNF) if I had started the 60k. Also, I got a big kick out of Joe… he said they take great pleasure in kicking our asses! I had a great time at this race, and might even do it again next year. I am proud of myself for finishing, and REALLY appreciate the ultra running community. All the volunteers who manned the aid stations were fantastic… and all the runners who participated in the race were friendly and helpful! The whole world could take a lesson from ultra runners…

one more thing... my friend Karla Wallace Scroggins took all the photos I have used in my blog.  My camera crapped out at Bataan and I have not replaced it yet.  Thanks, Karla!
Posted by malvs2walk at 8:18 PM 5 comments: