Just want to put in a quick review of the Rocky Raccoon Trail race in Huntsville.

Let's just say it, I did it again. I just pin on a number, and the race is on. Even though the marathon was just 6 days ago, I did this 25k trail race in 3:36:21for an average pace of 13:57.6. There were some really tough, hilly spots, and lots of tree roots to reach up and grab you. Thank goodness I didn't do anything more than trip and keep going.

It was a beautiful cold clear morning. We got to the race site so we could watch the start of the 50k race at 7am. The 25k started at 8 am. The first mile was on a paved park road, then off into the woods we went. As I stated in the daily thread... I know I was supposed to be taking it easy, but as soon as I pinned that number on my shirt last night, I started thinking, hmmm... I wonder how fast I can walk on the trails?

Even though we had some rain on Wednesday, the trails were thankfully dry. It looked like there were walking bridges over all the boggy spots, so no muddy shoes or wet feet to contend with.

Over all, it was a fantastic race, plenty of volunteers at the aid stations (there were 4) and they were well stocked with all manner of goodies. The sports drink was Heed, so I chose not to partake. I always bring my own along. The volunteers were very helpful and encouraging... they were eager to fill your water bottle, or pour you some coca cola if that was what you wanted. I think they even had some powerade for those who couldn't drink the Heed. Of course there was beer at the very first aid station. I couldn't believe that some actually drank it.

I never dreamed I could walk trails at the pace I was going. I kept thinking I was going to burn out, but I was able to finish strong, even though the mile 14 and 15 were mostly uphill.

It was a real treat to have a quick leg massage after the race was over, then I had my recovery drink. Which is, in case anyone has forgotten or hasn't been informed... Iced non-fat quad shot latte with 1 tsp of raw sugar. I always begin to feel better immediately after I drink it. I just want to say I had a fantastic time, and a great race.


"If you are content with the best you have done, you will never do the best you can do." anon. Maryann
Posted by malvs2walk at 9:29 PM No comments: 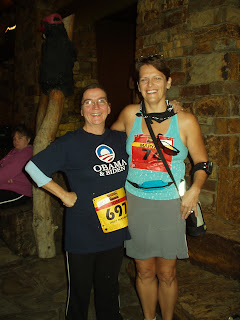 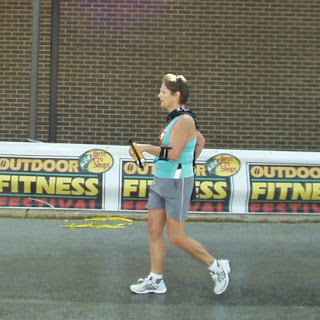 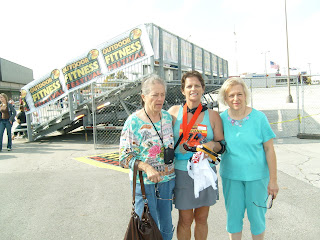