So, I have been screwing around long enough. It is time to put some thoughts down on paper about my first 100 mile finish. Sucks I had to enter a 48 hour race to walk 100 miles, but if I had to do it over again, I would certainly do it at ATY!

Part 1: The Drive to Arizona
I was planning to leave early Sunday morning so that my drive through west Texas could be done at 80mph. I ended up having to work and did not leave Sealy until about 7pm. It was already almost dark and it takes a LONG time to drive through Texas when the night speed limit on I10 is 65. . I think I stopped at a rest area (where?) at about 1am and slept in the car for about 2 hours because I was just too tired to drive any further without resting. Started out again and just kept cruising until I stopped for breakfast and just to get out of the car for a little while in Las Cruces. The rest of the drive was uneventful and I made it to my friend, Lauri’s house sometime Monday afternoon. I rested a little, and had dinner with Lauri and her family. She was kind enough to let me use her cabana as my base camp for the week! It was very comfortable and afforded me some privacy.
Tuesday, I was able to visit my Aunt Cil and Uncle Bob who also live in the Phoenix area. We had a nice lunch. After that, it was back to Lauri’s to organize my things in the car so I could go out to Nardini Manor where the race was held.

Part2: Across the Years at Nardini Manor
I arrived at the race site, and went to pick up my race materials and wonderful assortment of gear that came along with the entry fee. Gear bag, North Face fleece, North Face long sleeve tech shirt, Moeben sleeves and race bib belt. I went out a day early to work the aid station day 1 from 8-2, as my race did not start until Thursday morning. I also wanted to check out the race setup I had heard so much about. There was a huge tent, large enough for all the race participants to set up their individual tents inside of it. Inside this huge tent, there were two smaller heated tents where runners could take naps or simply come inside to warm up. I had NO idea how cold it could get in the desert outside of Phoenix, but was soon to find out because I slept in the car Tuesday night. I froze my ass off, even with a sleeping bag for cover! I did not have a problem getting up early in the morning. It seemed warmer outside the car than it did inside when I got up to make my oatmeal and get ready to help those first day runners. What a great group of people. The Coury family knows how to put on an ultra event! They have a full outdoor kitchen to prepare hot foods which were really needed at this race. It never got over 40 degrees that first day, and it started to rain at about 11am. I really felt for the runners and did everything I could to help make sure they had all they needed from the aid station… from hot chocolate to coffee and hot tea, hot soup and grilled cheese sandwiches. When my shift was over at 2pm, I was wet and muddy all the way up to my knees. The track was a muddy mess, even though Nick, Jamil, Nathan and all the other volunteers did everything they could to try and drain the water from the surface. The weather just got worse throughout the day and into the night. My friend Deborah invited me out to dinner with another friend, and we ate some wonderful pasta at Macaroni Grill, then it was time to hit the sleeping bag because the three of us were all starting our 48 hour race Thursday morning.
Deborah had set up her tent, and the cot would not fit inside, so she allowed me to put my sleeping bag in the tent. I am sure happy she did, because during the night, the wind howled so fiercely through the large tent, that Deborah had to fight to keep her blankets on, though the cot was inside the big tent. I was sleeping on the cold hard brick floor, but at least I was warm! Listening to the wind howl and the rain pounding down, I felt like I was in a hurricane, not out in the desert! This weather is apparently very unusual for Phoenix.

Part 3: Let my 48 hours begin!
I woke up early and got my Hammer Perpetuem/Hammer Gel mixture ready to start the race. 9am and we were off after a short briefing on how the race is managed. We changed directions on the track every two hours and that ended up being my favorite part of the race. LOL We were following each other around in circles with our names on our behinds and it was nice to look at faces once in a while. They have a messaging system where runners can receive messages from friends and a live webcast of the race which I am sure not everyone knew also had a live audio feed to the race website. I was planning to follow the 5k/break 50k/longer break pattern that had worked so well for me at Run Like the Wind. So, that’s what I did, though instead of just taking a break after 50k, I took a nap. It was rather difficult to get going again after the nap, but I changed clothes in the heated restroom and got my arse back out on the track after what I would guess to be about 2:30 after I finished the first 50k. It was SO cold outside by then, I think about 28! Everything was covered with frost, even our jackets I think. I was dressed in multiple layers (3 pants and 4 or 5 shirts). I was still cold, but able to keep moving. The second 50k was complete at about 7:30 am or 100k within 22:30. I went back into the heated tent for another nap, just thankful that I had been able to keep moving all night! I knew when I went back out to begin day 2 that I would not reach my dream goal of 201 kilometers. I was fine with that; just knowing I was certain to walk 100 miles is all I was really concerned with anyway. Dream goals are just that, dreams that sometimes to our complete surprise, come true.
Things were still going well for me, and one thing about me, I always have fun. After all, if this was NOT fun, I would not be doing it. So, I wear loud polka dot tights and they call me Hot Pants. Whatever. It’s FUN! I even got to walk a while with Ed “Madhatter Fancypants” for a while. What a cool guy. He and Adreas were duking it out for first place in the 72 hour race, and then they decided to tie it up. They ran/walked I think the whole last 24 hours together. Every step! I was planning to take my next little nap at 91 miles so I would have less than 10 to go to make that magic number of 100 miles, but it was almost midnight. Another nice runner would not let me go in for my nap and miss the New Year’s celebration. The RD’s called us all in from the track where they passed out party hats and noisemakers. We had a choice of champagne or sparkling cider to toast the new year, and as we all walked a loop on the track together, there was our own private fireworks display! When I stopped for another nap I was at 93 miles and only wanted to sleep for an hour, Ed and Andreas entered the heated area when it was time for me to get up and there was only one open cot… I quickly got up and gave one of them the cot I had been sleeping in. It took a little while for me to get all my layers back on… by this time I had on 4 pants and 7 shirts! It was SO cold, and the only way to keep warm under those circumstances is many layers. I felt like that kid in A Christmas Story… I couldn’t put my arms down at my sides!
I crossed the timing mat for 100 miles at 5:50:03 am, 44 hours and 50 minutes after I started! I thought for a while I might try to continue, but why? I did one more lap for good measure, and then went in for one more nap in the heated tent. I did come out to see the last runners cross the mat and it was amazing! What an experience! If I had to enter a 48 hour race to get to 100 miles the first time, then this was the race to do it at! WOW!

The awards ceremony was great! Every single runner/walker was recognized for their achievement. No one was made to feel like they did not belong. There were some amazing stories… the 2,000 mile jacket awarded to Martina Housman, the 1,000 mile jacked awarded to Ulli Kamm, the youngest person ever to complete 100 miles at this race… 13 years old! WOW! When they got to me and awarded me my 100 mile belt buckle, I felt like I would cry…and they all cheered for me! 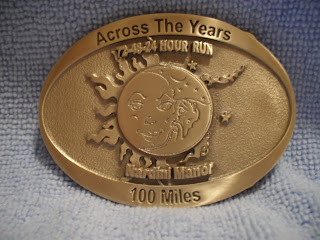 I actually had been tearing up off and on ever since I finished. I am ok with being weepy over such a huge accomplishment. I am also ok now with that let down feeling I got immediately after it was over.
We all packed up our things, wondering if the race will be held at this wonderful place ever again. The owner has moved and the place is for sale. So happy I was able to be there. Funny thing is that if this was the last year for ATY at Nardini Manor, it will be the second time I reached a milestone at a race that will no longer exist as it stands. I did my first ultra (a 50k) at the last edition of Sunmart.

Part 4: after ATY
The drive to Lauri’s house in Mesa was really tough. I went straight to sleep for about 4 hours… then was treated to one of the best blue cheeseburgers I ever ate! I was treated to a spinning session… Lauri spins her own yard from fibers she gets locally, then knits all sorts of wonderful things! Too sleepy for words, I went back to sleep and didn’t get up until around 9am on Sunday. My mind was all screwed up, I thought it was Monday already. Thank goodness it was not. I had to be at work on Tuesday and the drive home was not going to be fun. I ended up stopping for the night in Van Horn Texas and continuing home Monday morning. 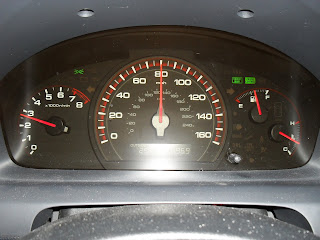 BECAUSE YOU CAN DRIVE 80MPH in west Texas in the day time.
I called lots of folks on the way home to thank them for the wonderful and fun messages I received during the race via the mailbox system. Spoke to a few of them about how LET DOWN I felt immediately after the race. I started to feel like a failure because it took me so long to reach 100 miles, and HOW, just HOW I would ever dream to think I could walk 100 miles in less than 24 hours. That let down feeling did not stay with me too long. I am now on a new path, thanks to another friend. And, that Centurion goal does not seem as elusive any more.
Posted by malvs2walk at 9:55 PM 8 comments: